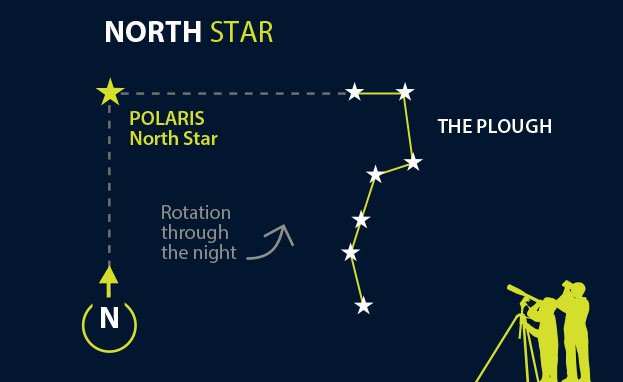 Here’s a few helpful tips to finding your way around the night sky:

The North Star (‘Polaris’) is positioned directly above the North Pole. Sailors have used it to navigate for centuries. The Plough looks a bit like a saucepan. If you draw an imaginary line from the two stars furthest from its ‘handle’, it will direct you to the North Star.

What are constellations and asterisms?

Simply put, they are our Earth-based interpretation of star patterns in the sky.  The ancient Greeks attributed mythical characters to many of the constellations we know today. Every culture around the world has created their own stories and legends about the shapes they saw in the sky.  In 1930 the International Astronomical Union set official boundaries on groups of stars and recognised 88 constellations across the north and south hemispheres.

Asterisms are smaller groups of stars that may be part of one or more constellation.  They are typically well known groups such as The Big Dipper (the Plough) or The Summer Triangle.

Circumpolar Constellations – as the name suggests, these star groups circle the celestial pole. For that reason, they are constantly visible (from the Northern Hemisphere).

Cassiopeia – Look out for the group of stars forming a giant “M” or “W” (depending upon time of year).  Cassiopeia is the vain & boastful mythical Queen of Ethiopia.

Ursa Major – Latin for “the Great Bear.” This well-known constellation includes the seven stars that form “The Plough.”

Ursa Minor – Polaris marks the tail end of Ursa Minor (the Little Bear). The two stars at the other end are known as Guardians of the Pole (Kochab and Pherkad).

Stars in the southern sky change with the seasons.

Look for a group of stars in the shape of a reverse question mark. This is the head of the constellation known as Leo (the Lion).

Cygnus ‘the Swan’ appears to be flying down the Milky Way. Look out for the Summer Triangle too – a formation of three bright stars: Deneb, Vega and Altair.

Pegasus – the legendary winged horse. The body of Pegasus is formed by the Great Square.

Just beside Pegasus is our nearest large galaxy – Andromeda. It appears as a fuzzy stretched blob in the constellation of Andromeda.

In winter months, Orion ‘the Hunter’ from Greek mythology is prominent. His belt is easy to spot – formed by three bright stars.

Here’s our guide to using a FREE software called Stellarium and to loading a local backdrop via www.MayoDarkSkyPark.ie

Did you know? You’re Time Travelling with the stars…

The light you see from a twinkling star has taken millions of years to reach you, so when you look at the stars, you are actually looking back in time!