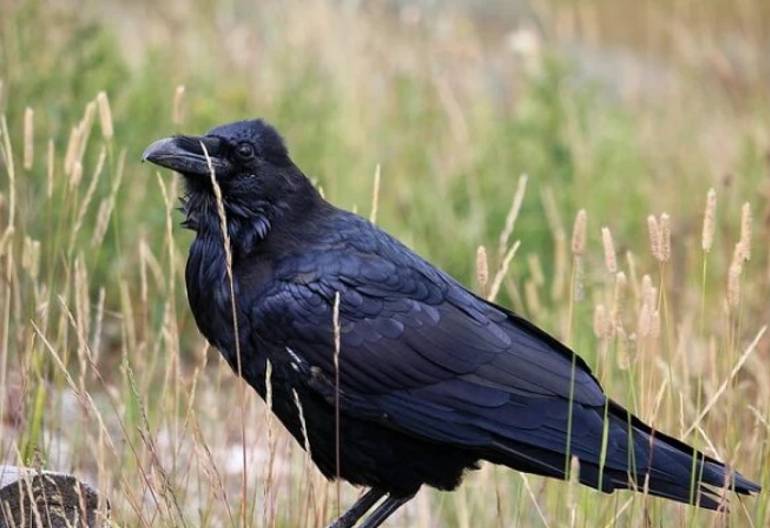 The Raven (Corvus Corax) or Fiach Dubh in Irish, has an intellect to rival chimpanzees and dolphins, making it one of the most intelligent creatures on the planet.

This creature is part of the Corvidae family of birds, consisting of over 120 species globally, with seven species in Ireland: Magpie, Jay, Rook, Hooded crow, Jackdaw, Chough and The Raven.

This large bird, is often misunderstood. The largest of the perching birds, (passerines), with its black plumage and disturbing deep hoarse croak. Ravens feed on the carcasses of dead animals, which has led to it being depicted in Myth and Legend as an evil creature. Often illustrated in stories and movies, hovering over battlefields waiting to feed on the fallen.

Having the ability to talk, has resulted in the Raven being associated as a messenger of the gods, a portal between the living and the dead in cultures throughout the world.

What this actually means is these beautiful birds are very smart, adaptable, and truly amazing creatures

In recent times, there have been many scientific experiments to prove how intelligent this bird really is, some of these intelligence tests, have included using simple tools such sticks and stones to operate a “puzzle box” that operates similar to a vending machine to get food. During this experiment one of the birds was actually disqualified for being too intelligent!

Raven’s have been observed using similar techniques in the wild, using twigs to hook out bugs from holes in trees and shaping stiff leaves into sharp instruments and using them to probe under leaf detritus for insects and invertebrates.

The Raven has the ability to mimic noises, they have been heard making sounds such as car engines, toilets flushing, alarms, other birds and even human voices. They cleverly use this skill, to mimic foxes and in other countries, wolves, it is as if they summon the fox/wolf to the dead animal, the fox or wolf then does the hard work of opening the animal up, which results in the raven being able to avail of a meal. Shrewd operator!

In captivity the Raven has been known to have a better vocabulary than some parrots, and it’s not just verbal communication they excel at, Scientists have also discovered that Ravens use their beaks and wings much like humans use their hands to make gestures, such as for pointing to an object. They often lead those gestured at to look at the objects. The ravens then interact with each other by either touching or clasping their beaks together, such sociable birds.

Not only are Ravens extremely intelligent and sociable but they are also very acrobatic birds. When walking in the mountains I love watching Ravens tumbling from the skies performing a wide variety of aerial acrobatics, before regaining flight again, they can also fly upside down for brief periods. Most birds seem to fly mainly for practical purposes, like searching for food, avoiding predators, or simply moving from place to place. Ravens fly for all these purposes too, however they also seem to cavort in the air with joyous abandon simply because it is fun.

Why does the Raven fly upside down? Because it can! 🙂

This website uses cookies to improve your experience while you navigate through the website. Out of these, the cookies that are categorized as necessary are stored on your browser as they are essential for the working of basic functionalities of the website. We also use third-party cookies that help us analyze and understand how you use this website. These cookies will be stored in your browser only with your consent. You also have the option to opt-out of these cookies. But opting out of some of these cookies may affect your browsing experience.
Necessary Always Enabled

Performance cookies are used to understand and analyze the key performance indexes of the website which helps in delivering a better user experience for the visitors.

Analytical cookies are used to understand how visitors interact with the website. These cookies help provide information on metrics the number of visitors, bounce rate, traffic source, etc.

Advertisement cookies are used to provide visitors with relevant ads and marketing campaigns. These cookies track visitors across websites and collect information to provide customized ads.

Other uncategorized cookies are those that are being analyzed and have not been classified into a category as yet.